These were all titles Patty Rudulph went by fourteen years ago when her fourteen year old son came home and told his family he was gay. That day she added a new title to her life, one she still proudly holds to this day – LGBTQ advocate.

For many gay youth coming out to their parents is a dreaded task. How will they respond? Will they still love me? Some parents say it’s a phase, others look into “Conversion Therapy” and sadly some parents simply say “get out.” For the Rudulph family it launched their entire family into an incredible journey. Patty spoke recently to HL Founder, Scott Tayloe, and shared a bit of their story.

“My son came out at a time in which no policies existed in our schools. There were no GSAs for him to be a part of, no anti-bullying campaigns or LGBT youth groups,” Patty told Scott. “Fourteen years ago was long enough ago that the climate was very different,” she said. Instead of hiding the news, they simply fought for him. They shared the news and their full acceptance with all family members who quickly rallied their support. They read up on everything they could to ensure he continued to have a healthy and productive life. In short, they did what every parent would do for their young: they loved and protected him. 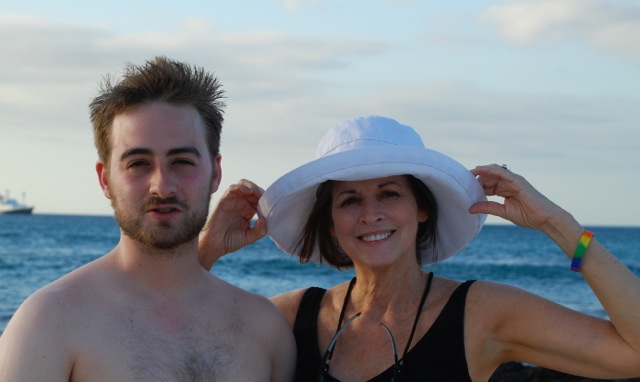 “I see many parents who often struggle with the news that their child has come out. As an advocate and leader in our area PFLAG (Parents for Lesbians and Gays) I never wanted to judge them or tell them how they should feel. They have their own emotions to go through and often the news is a direct conflict with their own culture, environment or beliefs that make the news that much more difficult to accept,” Patty shared with Scott. “They don’t want to give up on these beliefs and they shouldn’t have to but they should learn to mitigate any negative behaviors they may have fallen into doing, like not standing up for their child. All parents should focus on what you know to be true, that no matter what you will always love and protect your child.”

The CDC shows that each year we lose over 4,600 youth, ages 10-24 to suicide, the third leading cause of death among our youth. For some young people, their struggles with coming out, mixed with a non-supportive home environment only add to this statistic.

For those living outside of the South we often see the struggles and barriers that the LGBT community is up against, but the Rudulph family is proud at how far their local community has come. “Birmingham has done so many wonderful things. We’ve truly evolved and collaborated on so many wonderful efforts. We started a safe-schools coalition, designed a Magic City Acceptance Project and started a program to train local social workers ensuring they know how to work directly with our LGBT youth. Many of our schools now have GSAs and churches are coming forward with their support of the community, it make me feel proud of our city,” Patty shared.

We so often hear stories of struggle in the media and stories with a happy ending often only seem possible in a Hollywood film. For Jake Rudulph, his mom helped write his happy ending. When her son came out to her in the south, fourteen years ago, instead of questioning the news, she turned it into what she now calls a rewarding family journey.

Patty Rudulph still lives in Birmingham, Alabama with her husband and daughter, all still advocating for LGBT rights in their community. Patty recently retired from her duties as Executive Director for PFLAG and is now working on an area GLBTQ Fund at the Community Foundation of Greater Birmingham, working to provide grants for causes advocating for GLBTQ rights. Jake now resides with his partner in Raleigh, North Carolina.

Do you have a beautiful coming out story?