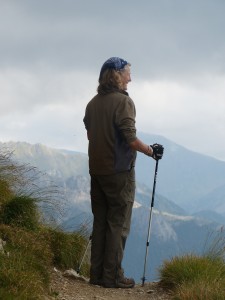 The only time I ever really wanted to kill myself was when my boss found out I was sleeping with a girl.

Oh there had been those occasions when I was younger:

– Mom didn’t love me as much as she loved Dena so I sat in the garden and ate nasturtium, the ones I thought she said were poisonous

– Standing on the roof’s edge of the highest building in my home town with a few beers in me, a little lonely and bored and just struck with the idea that this would be as fine a time as any to go

But this time it felt like a real possibility.

I had been at home in the shower, soaping up with the first official lesbian I had ever been involved with when there was a knock on the bathroom door and I heard Patty, the general manager of the hotel where I ran the kitchen say, “Anybody home?”

“Are you with your rubber ducky?”

I held my hand over rubber ducky’s mouth, a move I have never had the opportunity to apologize to her for, and my mind raced through what I could possibly say to prevent Patty, the last woman I had slept with, from coming in the room and confirming that rather than just being sexually free, I was actually a lesbian.

It was the mid-seventies in Virginia, and not quite the hot bed of “if it feels good, do it” when I moved into town, a young single mom from away with a taste for pot and wine and an appetite for sex. Men had been my primary bed buddies until just a few years prior, my New England upbringing having held no suggestion of another option. Not that I had not heard of gay (which is what everyone was considered at the time who preferred to be with people of their same sex) but what I knew was that it was not the best way to be and it was not what I had any intention of being. Fooling around (which is what we called most of our sexual behavior at the time that was not the regular kind) was no big deal, in fact it was part of an identity that said I am young and free and loving life. But being with a woman who was quite certain of her homosexuality was a step in the wrong direction. And the only thing worse than that was to be caught doing it.

The door opened, the three of us looked at each other. The door closed.

The time between being trapped in the shower and shoving my companion out the back door of my house are lost to my memory. I only know that I made her leave and I spent the rest of that day and night suspended in agony over what I was going to do next. To walk into work the next day was unthinkable. I had no doubt that my boss would have told everyone at the hotel what she had found. I could not imagine saying good morning to my staff or even greeting the front desk clerk with them knowing that I was officially gay. In my mind this nullified any legitimacy I had as a woman and as someone that they should respect. I would be a laughingstock and a pariah.

I would have to kill myself.

I write this now and it seems, well, dire. Living in a state where the voting populace has legalized same sex marriage and, newly, in a country where the Supreme Court has declined to uphold the right of states to refuse it, it is almost unimaginable that I could have been in a such horrifying condition.

But I remember it so clearly. I felt as though I could not go on if I was going to be gay. And yet, as is obvious now, I could not kill myself either.

Something changed in me that night. I do not know where I found the courage to get dressed the next day and go into work. I can feel myself taking a deep breath as I pulled open the glass door to the lobby of the Sheraton. I see Holly looking up at me from underneath her bangs, a smile on her face that said to me “I know about you” and me looking back at her silently saying “and here we go.”

Having no choice other than to be who I was began a journey that has allowed me to be the person that I am. I could not kill myself that night because I did not want to be dead, I just didn’t want to face the fears I had of the truth.

Being gay has proven to be only the beginning.

Dulcie Witman calls Maine home, has a private therapy practice in Portland, teaches creative writing and runs annual retreats in Italy.  Find out more about Dulcie on her website, dulciewitman.com