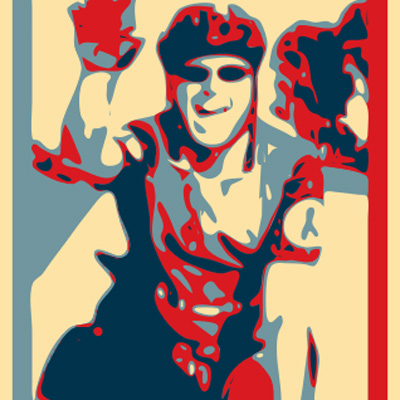 When Joe Ede was first diagnosed as HIV positive, his best friend asked him what he was going to do. At the time, Joe said he would seek treatment to find out how he could live as long as possible. But Joe did more than that – he dedicated his life to others. It’s people like Joe who inspire us. Read on to find out how Joe learned many of his life’s best lessons — and ideas — while pedaling.

In July 1997 I completed my first AIDS Ride, a six-day, five-hundred mile bicycle ride from Minneapolis-St. Paul to Chicago. In order to participate, each cyclist is required to raise a minimum of $2,300. As soon as I finished this ride along with two-thousand other cyclists from all over the world, I knew I wanted to do it again in 1998. What I didn’t know was that these were the last few months of my life as I knew it.

That following October I was diagnosed with HIV. I remember the exact day – October 7th. I stumbled home in shock and called home to Iowa to tell my best friend, Todd. It was then I received another shock. Todd told me he had been diagnosed as well, earlier that same year.
“What are you going to do?” he asked. I said I would go to the clinic in Minneapolis specialized in treating HIV and other infectious diseases to learn more about my health and what I could do to live longer. At the time, the new cocktails were just coming out and I immediately went onto medication. Todd, on the other hand, told me that he was scared and not going to search out treatment in Iowa.

In the early spring of 1998, I began to train for my second AIDS Ride. As I prepared for the journey ahead, I couldn’t help but think about Todd. He stopped calling me and we lost touch. Then one day his mother called me to tell me that Todd was in the hospital and near death. When I arrived at the hospital, I found Todd sedated but his spirit and humor was shining through. As good friends often do, we made jokes as if nothing had happened and as though time had stood still.

A few days later, Todd asked to be sent home from the hospital. His t-cells were below two-hundred and while he was dying from major complications from HIV, he was officially “living” with AIDS. Forty-eight hours after going home, I watched Todd die in his own bed surrounded by his family and friends. I’d never seen anyone pass away and I didn’t quite know what to expect. It was certainly not like anything I’ve ever seen on television. Towards the end, it was heartbreaking to watch Todd who was unable to speak, try to communicate by blinking his eyes. I will always remember his fighting spirit, not wanting to give up. Todd left us peacefully at 8:24 the morning of August 4, 1998.

No words can describe the loss of a best friend just like there are no words to describe what it is like to lose a son, a brother, an uncle. I will always think of Todd as a living, breathing, strong person. I will always remember his passion for music, dance, the arts. His quick wit and awesome laugh.

Since Todd’s passing, I have dedicated every AIDS Ride I’ve completed in loving memory of his fighting spirit. Over the last seventeen years, I have completed forty-four AIDS Rides around the United States, Europe and Canada. I have ridden over twenty-two thousand miles and have personally raised over one-hundred thousand dollars for AIDS service organizations around the country. I have trained hundreds and hundreds of participants for AIDS Rides and other charity cycling events such as ALS, breast cancer awareness, MS and more. When I ride these events, I meet many incredible people starting their own journey, just as I started mine back in 1997.

Riding a bicycle is a metaphor for life. Just like life, cycling can take you in many directions. You can go left or right, but the point is to always be headed forward. The past couple of years I’ve been thinking about ways to take what I’ve learned and continue to help others. I wanted to teach people how to ride a bike safely and efficiently. A year ago I decided to take my passion and make it my livelihood. With that, I began the journey of creating a cycling business. With the help of some tech-savvy friends, Cycling with Joe is now a website which hosts my outdoor ride schedule and charity information.

I had no idea this path would turn out to be such an incredible journey. That it would teach me that true giving is about helping others without expecting anything in return. It’s an honor to be able to help people tap into their own fighting spirit. Seventeen years later, I am always thinking of Todd, thinking of my own health and the bigger picture; that I’m here on this earth to help others. I believe this is the journey, the path for all of us.