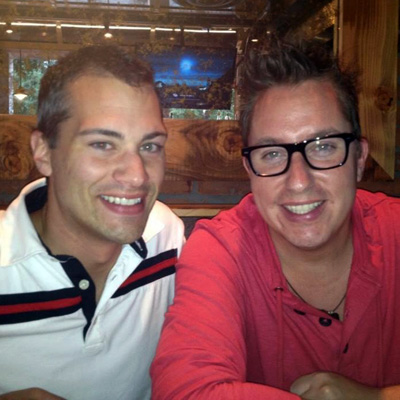 The founders of 82South met thirteen years ago online on Planet Out back when meeting online was unheard of and practically taboo. Despite being in the same city, they took it slow and talked on the phone for two years (!) before Brian finally asked Matthew on a date. Their first date? Bennigans and a movie. The rest? History.

Nearly thirteen years later, this Pisces duo is not only joined in civil union but also in business. Together they run 82South, the event production company responsible for organizing last year’s entertainment at Come Out With Pride Orlando. Brian’s background in production and Matthew’s extensive experience in staffing came in handy as 82South, along with seven other board members who work their heart outs for eleven months of the year in order to execute Come Out With Pride, the largest pride event in Florida.

In 2014 over 150,000 people attended Orlando’s Come Out With Pride which is 20,000 more than last year. Rumor has it the city of Orlando says the event has not only outgrown the city, but the entire state.   “It’s a good problem to have,” says Matthew.

As for Brian and Matthew, they have high hopes for a shared future in Florida. Married in a civil union six years ago in Chicago, they say they’ll make it official in the state of Florida as soon as it’s legal to do so.