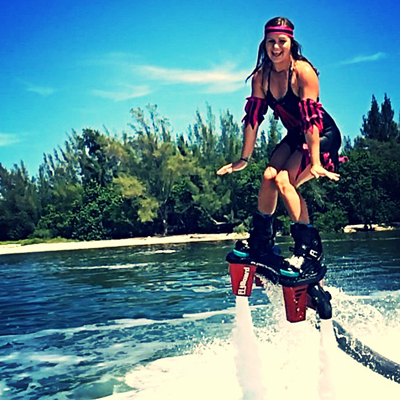 According to Wikipedia, a Flyboard is a type of water jetpack attached to a personal water craft (PWC) which supplies propulsion to drive the Flyboard through air and water to perform a sport known as flyboarding. A Flyboard rider stands on a board connected by a long hose to a watercraft. Water is forced under pressure to a pair of boots with jet nozzles underneath which provide thrust for the rider to fly up to 15 metres in the air or to dive headlong through the water.[1]

Meet Nellie Kubalek, the only professional female Flyboarder in the U.S.  While she was once a novice at this spectacle of a sport, she quickly began landing back flips and throwing 720/1080 spins…on her third day of flyboarding.  “Flying is a feeling in and of itself.  The adrenaline that comes rushing in and the feeling of being free is priceless.”

This Orlando-based dare devil took her flying a bit further and excelled, becoming the only female flyboarder to qualify for the Flyboard World Cup in Doha, Qatar.

In May 2014 Nellie opened her own rental company, Full Throttle Flyboard.  “I wanted to teach people about this growing sport and to get more females involved and inspire them to go for what they want in life and that no dream is too big to make a reality.”

In October 2014, Nellie qualified for the Flyboard World Cup which was held in December in Dubai.  Unfortunately, she was $4000 short on her budget and was unable to attend.  That has not stopped Nellie from pursuing her dream.  She trains twenty to twenty-five hours a week and recently signed with P1 AquaX and P1 SuperStock to perform at all their races around the state of Florida.

Determined to stay at the top, Nellie has started training on a new device made by X-Jets similar to the flyboard called the JetBlade.  The JetBlade has “independent feet” which allows her to accomplish more on the board.  “I was the first female to land a backflip on this new HydroFlight device, and currently I am the only female in the World who can land a Double Backflip on both devices.”

And if all that’s not enough, she’s also currently training on a new board called the HoverBoard.  With her determination and passion, it certainly won’t take long for her to master that too.  Nelly believes there’s a superhero to be found within all of us.  She says you might just have to fly to find yours.