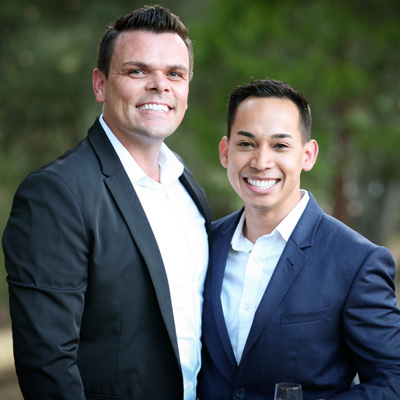 For him, coming out meant being honest first and foremost with himself about his sexuality, not just to his family and to the world. This was in 1999 and at the time, making a statement about one’s homosexuality in the panhandle of Florida where he grew up would have been more than unimaginable. “It would have been a death sentence,” he says.

Peter met John while still in college at the University of Florida. John was in Dalton, Atlanta, working full time in cable ad sales. For nine months the two of them got to know each other over a long distance relationship. The day Peter graduated from college Peter said goodbye to his family, packed up his apartment and moved to Georgia with John. Moving to a new place and committing so fully to what was still a new relationship was a risky move, especially since he had his degree but had not yet secured a job. Still, the two of them made it work. It didn’t take long for Peter to find a job. John continued his work in cable ad sales until he approached a total burn out with corporate life. “Something had to give,” Peter said. John set out to start his own design business while Peter would go on to work for over a decade in corporate HR.

Peter has recently joined John full time at John McClain Designs, where they specialize in customizing interiors for clients all across the U.S. Last May (2014), John McClain Designs opened up his showroom, Gilded Home in beautiful Winter Park, Florida.

About merging the partnership in all aspects of life, Peter says that they are not only best friends, they are each others’ true support. “John’s eternally optimistic,” Peter says. “He never has a Plan B.” Peter describes himself as a realist and perhaps even a bit of a pessimist in comparison to John.

Peter now says he cannot imagine his life had he not come out. On most days he says they’re both so happy he just feels like saying, “Pinch me.”