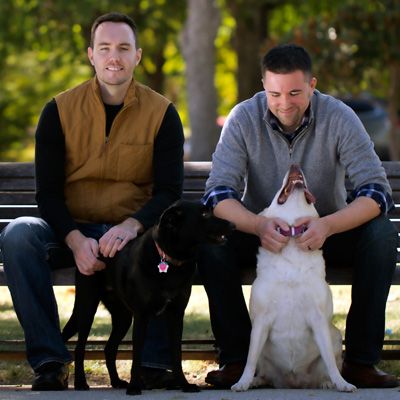 Eric and I met online in late 2003 and we’ve been together ever since, if I don’t count the year and a half to two years when I needed to be single. You have to cut me some slack. I was twenty-three and not ready to settle down.

My point is that we’ve been together a long time. It’s been so good. I love the man more every day.

Eric proposed to me on NYE at midnight, 2013 at a friend’s house party. I was so surprised, and moved. Of course I said yes!

So 2013 was all about figuring out what we wanted to do, where we wanted to get married, how we wanted to do it. Marriage equality was such an issue in 2013, and we at that point the state of Missouri hadn’t yet announced they would recognize (for tax purposes) gay marriage if the couple got married in another state. So, somewhere along the way, Eric and I decided to go to a justice of the peace in Seattle, WA to actually get married. A few of our closest friends joined us in Seattle that weekend, and it was the most fun weekend we’ve had before. That was on April 4th, 2014.

On April 11, 2014, we had our celebration at The Thaxton in St. Louis. Eric was hesitant about having a giant party, but I said that this will be (probably) the ONLY time in our lives where we can get all of our of the people we love in the same place at the same time.

The night of the celebration came and went. It was such a blur looking back, but it still leaves both me and Eric with warm and fuzzies. To have everyone there celebrating OUR marriage and commitment to each other…there are no words. Touched, blessed, lucky…I don’t know. None of those words do it justice.

So that’s our story. It’s pretty simple. We met online, we fell in love, we got married, and we had a party to celebrate with our loved ones. I like to think it was the best single night I’ve gotten to share with Eric. All the love and support…I just like to bask in it.