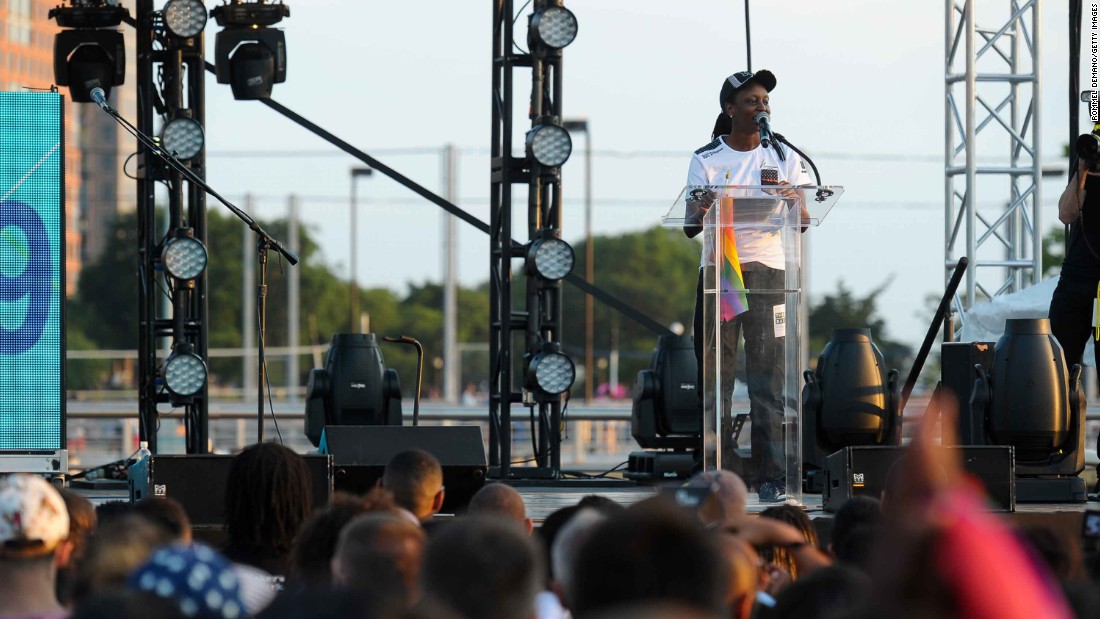 The Face of Uganda’s LGBTQ Movement

Kasha Jacqueline Nabagesera is an openly gay woman in Uganda, a country where homosexual acts are punishable by prison sentences. Nabagesera is not only open about her sexuality but she’s made fighting for the rights of Uganda’s LGBTQ community her life’s work.

At 13 is when Nabagesera started writing love letters to girls. “That’s when reality kicked in and the word ‘lesbian’ started (having) a meaning to me,” she told CNN. Nabagesera says she received countless suspensions and expulsions from various schools as her sexual orientation became increasingly apparent. At Nkumba University, Nabagescera says she “…was made to sign a memorandum of understanding with the university administration that I would start dressing like a ‘proper’ woman and I had to report every day to show them that.” She was forbidden from wearing baseball caps and any other clothes that were considered to be for boys. Nabagesera was also banned from being 110 yards of the female dormitory rooms.

Nkumba University was set to expell Nabgesera until her mother intervened. Nabgesera’s mother told her “Kasha I am going to have to say something you will not like, but I have to do this.” Mother and daughter went back into the university’s administration office and Nabgesera’s mother said “Kasha is sick and her sickness has no cure. Just let her finish her studies and she will leave.” Nabagesera says she was shocked. “But after the meeting my mom told me she had to do it to save my education because this time they were determined to expel me.”

Despite the charade at the university, Nabagesera says her family have provided her with unconditional support.
Nabgesera says her mother and father created a very liberal home environment. “I don’t think I’d be able to do this work if it wasn’t for my family,” she says. “My parents always encouraged me …they just took me for what I was.”

These events during Nabagesera’s education motivated her to found Uganda’s LGBTQ movement at the age of 19. “I became interested (in gay rights) and wondered: ‘Why is this such a big deal?” It was only after doing some research that she realized it was illegal to be gay in Uganda. Deciding she had to do something, Nabagesera began holding meetings in a ‘den’ with friends to discuss LGBT discrimination. “I’ve realized there’s a lack of information, education and a lot of ignorance and naivety (in Uganda),” Nabagesera says.

In 2003, Nabagesera co-founded Freedom and Roam Uganda (FARUG) to defend the rights of Uganda’s lesbian, bisexual and transgender people. The organization was the first of its kind in Uganda. FARUG took it upon itself to defend marginalized women by meeting with politicians, increasing positive media coverage around LGBTQ issues and conducting workshops and conferences. The website says the organization “recognizes diversity, challenges male chauvinism, patriarchy and cultures that aim at oppressing women.”

Taking such a prominent role in the fight for LGBT rights in Uganda was not only a brave decision, it was a dangerous one. She says it’s scary not knowing what could happen to her at any moment. “It’s a strange and weird life I lead. Today things can be calm, I can go anywhere and nothing happens, then the next day it’s all hell. The good side about growing up gay is that my openness brought so many people like me together which resulted in building a movement. The downside of it is the insults, ridicule, abuses, threats.”

In 2015 Nabagesera created Bombastic, Uganda’s first LGBTQ magazine. The free magazine publishes personal stories and the experiences of the LGBTQ community in order to raise awareness and fight discrimination. Nabagesersa says it is unlike any other publication in the country. “We can freely share our stories and work without any bias,” she says. Nabagesera and her team distributes the magazine nationwide in Uganda, leaving it on doorsteps and car windshields, as an attempt to educate as many Ugandans as possible about the LGBTQ community. “I’m seeing changes in the community and people now realize they’re not alone,” she tells CNN. “Now no one can ever say we, the LGBTQ community don’t exist.”

If Nabagesera wanted a safe, peaceful life with more sexual freedom, the easy answer might have been to leave Uganda.
But leaving her home country is out of the question for Nabagesera. “It’s a big sacrifice but there’s no place I really want to live and call home like Uganda. I founded this movement …if I leave I will be abandoning the community. But when they know you are here and they know you are around it gives them some kind of safety … Some kind of solidarity.”

And Nabagesera says that while it’s slow, change is happening. “I know my children and my grandchildren will not have to go through what I’ve gone through. There’s a shift in mindset and that’s really something to celebrate.”
Nabagesera says there is an increase in the number of Ugandan LGBTQ activists, particularly from the younger generation. “It doesn’t mean everything is OK but at least there’s a very, very big difference from where we began.”