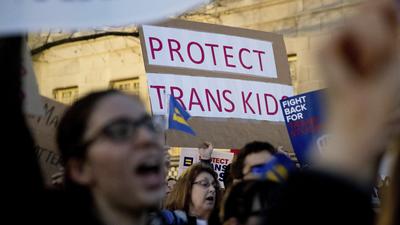 Suicide is the second-leading cause of death in the United States for people aged ten to twenty-four.  The Trevor Project, an organization that works to prevent suicide among LGBT youth, states that young lesbian, gay and bisexual (LGB) youth are particularly affected, attempting suicide at four times the rate of straight youth.

Julia Raifman is a study leader and a postdoctoral fellow at the Johns Hopkins Bloomberg School of Public Health. Raifman and her team analyzed thirty-two of the thirty-five states that legalized same-sex marriage between 2004 and 2015, before the Supreme Court legalized it nationwide.

Raifman’s research found that suicide attempts by high school students decreased by seven percent in states after they passed laws to legalize same-sex marriage.  Among LGB high school students, the decrease was especially significant, with suicide attempts falling by fourteen percent. But in states that did not legalize same-sex marriage, there was no change.

Raifman told the NewsHour she was interested in studying same-sex marriage laws “as a marker of equal rights in general,” adding that other laws that pertain to LGBT rights, such as employment and housing protections, still vary widely around the country.

The study noted that the laws themselves reflected larger social trends toward support for the LGBT community, a possible factor in the fall in suicide attempts. Raifman said that the decrease was especially concentrated around the time that same-sex marriage laws passed. It is possible that the laws “communicated to young LGB populations that they were equal, and that improved their mental health,” Raifman said. “It’s also possible that increased visibility for same-sex marriage, both in politics and media coverage, increased LGB adolescents’ sense of social support,” she said.

A study published in Pediatrics in 2011, stated that LGB youths were twenty percent more likely to attempt suicide if they were living in unsupportive environments. Raifman said the study suggested a lot of ideas for further research on how different environments can add to, or detract from, the risk for suicide.

“Regardless of political views, I think everyone can agree that reducing adolescent suicide attempts is a good thing,” she said.

The results give more context to the potential effects of social policy on mental health.

A Safe Place to Land

Buzzfeed LGBT posted a short but very significant video about the importance of acceptance for transgender children from their families. Please take a minute and watch the video here

How WikiLeaks Could Effect The LGBTQ Community

WikiLeaks and its founder Julian Assange believe in full transparency, which is his justification for releasing thousands of Hillary Clinton’s private emails. Assange has said “The more secretive or unjust an organization is, the more leaks induce fear and paranoia in its leadership and planning coterie.”

However this transparency can have life changing and deadly consequences for members of the LGBTQ community. Outing someone when he or she is not ready has been criticized and an invasion of privacy but is also so much more. Outing a person can cause severe psychological damage.  LGBTQ youth can be kicked out of their homes and outing someone before they are prepared can even have fatal consequences.  The Washington Post has said that WikiLeaks operates under a “reckless just-publish-everything mentality, acting with a blatant disregard for the civilians caught in the crosshairs.”

In ten countries around the world, being LGBT is not only illegal, it is punishable by death. These countries include Yemen, Afghanistan, Nigeria, Iran and Saudi Arabia. Saudi Arabia is the same country where WikiLeaks forced gay men out of the closet. In March, a Saudi Arabian newspaper reported that government officials sought to make posting or commenting on one’s sexuality on social media sites would be a crime punishable by death. This ruling follows a rise in sting operations targeting gay men, with thirty-five criminal prosecutions for sodomy in the previous six months.

The latest LGBTQ person was put to death in Iran. The Iranian government claimed that Hassan Afshar, a 19-year-old high school student, raped another young man. Afshar’s parents insisted the sexual encounter was consensual but that did not matter. Afshar was denied representation from an attorney and was put to death by hanging on July 18.

Even in the U.S., the LGBTQ community can face consequences for being out. According to UCLA’s Williams Institute, between 15% and 43% of LGBT people have faced on-the-job harassment.  An individual can be fired for being a member of the LGBTQ community in twenty-eight states, including Kansas, Mississippi, Idaho and Indiana. The Williams Institute of UCLA School of Law reports that 40% of homeless youth identify as a member of the LGBTQ community. A majority of these teens were kicked out of their homes because of their sexual orientation or gender identity. A suicide attempt is 8.4 times more likely when LGBTQ youth feel rejected compared to those who feel accepted by their community.

This WikiLeaks’ philosophy is making its way into other media outlets as well. Nico Hines, a writer for the Daily Beast posed as a gay man on hookup apps like Grindr and Jack’d. Hines during the Rio Olympics. Hines claimed he was looking to “meet up” with male Olympic athletes. Hines original article made it simple to figure out which male athletes responded to Hines’ “meet up” requests (identifying information was later redacted by The Daily Beast). Many of these Olympic athletes were from countries where being out remains illegal.  Eventually the article was removed from the site.

By outing LGBTQ people, this WikiLeaks’ mentality is not holding people accountable, it has “helped bigots, bullies and oppressive regimes everywhere.”

Be Your Own Tribe

Wentworth Miller, the openly gay star of Prison Break, told LGBTQ youth on National Coming Out Day that “We all ‘come out.’ In our own way. Usually more than once. Ideally in our own time. If you’re on that road… blessings. And much love.”

He also shared words of encouragement with for LGBTQ youth who feel alone with Attitude magazine. “I would say what others have said: It gets better. One day, you’ll find your tribe. You just have to trust that people are out there waiting to love you and celebrate you for who you are. In the meantime, the reality is you might have to be your own tribe. You might have to be your own best friend. That’s not something they’re going to teach you in school. So start the work of loving yourself.”

If you knew the person next to you could be carrying a gun, would you be willing to express yourself? This is the question facing college students in Texas as they headed back to school.

On August 1, Senate Bill 11, known as the campus carry law, went into effect in Texas. This law allows students at state universities who have licenses to carry concealed handguns to bring those guns anywhere on campus, with the exception of “exclusion zones.”

What is an “exclusion zone”? The majority of dorms are “exclusion zones” but not some research centers, some classrooms, religious centers, day care centers, health centers, veteran center and the LGBTQ Resource Center. “Wow, I just assumed it was, out of common sense,” was University of Houston student Robyn Foley’s reaction when Foley learned that the center was not an “exclusion zone.”

University of Houston faculty member Elizabeth Gregory states that many faculty members are concerned about the law and how it will affect class discussions especially with controversial subjects. “The whole point of being at university is being able to speak your mind,” she said. “This dampens that because people never know what the person next to them might be thinking about what they are saying.”

How would this law affect your college experience? Would you be willing to express yourself, if you knew the person next to you was concealing a weapon? On the flip side, do you feel any safer knowing your fellow classmates are concealing, or more scared? Leave a comment and let HL know what you think.