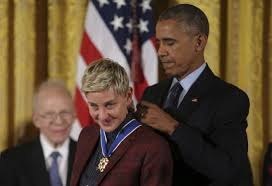 President Obama awarded Ellen DeGeneres the Presidential Medal of Freedom on November 22. The Presidential Medal of Freedom is the Nation’s highest civilian honor, presented to individuals who have made especially meritorious contributions to the security or national interests of the United States, to world peace, or to cultural or other significant public or private endeavors.

President Obama reminded himself and the audience about how courageous DeGeneres’ decision to come out of the closet in 1997 had been. “It’s easy to forget now, when we’ve come so far, where now marriage is equal under the law, just how much courage was required for Ellen to come out on the most public of stages almost twenty years ago,” President Obama said. “Just how important it was.  Not just to the LGBT community, but for all of us.”

During the actual awarding of the medal, a White House aide summarized her career. “In a career spanning three decades, Ellen DeGeneres has lifted our spirits and brought joy to our lives as a stand-up comic, actor and television star,” he said. “At a pivotal moment, her courage and candor helped change the hearts and minds of millions of Americans, accelerating our nation’s constant drive towards equality and acceptance for all. Ellen DeGeneres has showed us that a single individual can make the world a more fun, more open, more loving place, so long as we just keep swimming.”

Obama Speaks Out Against Homophobia in Africa

President Obama went on to compare the oppression of black people in Africa due to European Imperialism to the way LGBTQ people are oppressed in some African countries.

“You can’t, on the one hand, complain when somebody else does that to you, and then you’re doing it to somebody else,” said the President.