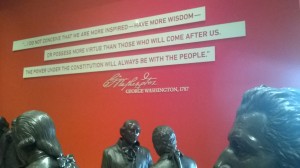 According to a buzzfeed quiz, Which founding father is your soul mate? if I were a colonial, bonnet-wearing babe from back in the day,I’d have apparently had the hots for George Washington.

I’m not usually the kind of gal who likes pony-tale toting men.  However, looking past the pony-tail, I read on.  It seems I’m attracted to “raw power” and “alpha males.”

Apparently I “want the best or nothing at all.”

Can’t argue with that.

The last few days I’ve been in Philadelphia (city of brotherly love), enjoying a thorough and much-needed review of American history.  This city is the birthplace of our nation as it is today; a place where the presence of our founding fathers is palpable and George is definitely in the midst.  Today I felt him at the National Constitution Center when I came across his beautiful, awe-inspiring words:

“…I do not conceive that we are more inspired — have more wisdom — or possess more virtue than those who will come after us.  The power under the constitution will always be with the people.”

Our country was gifted with an incredible first leader; a wise, humble human being full of hope for the future, full of faith in the people.

“Truth will ultimately prevail where there is pains to bring it to light.”  — George Washington