The Pilot Blog: The Priest that changed it all – Life pre-Hayden

Four years ago, in 2011, we made a decision. We would leave our home in Florida and start our family. It was a place I had called home for over 10 years and a place that my husband only knew. For a place we loved so much, sadly it didn’t seem to love us back. To understand why we left and to even begin to grasp why we would return, we first must go back in time to see the moment that made us question the love our home really had for us. Many of you may know this story, but in any good play or movie you must first set the stage:

It was fall-time, which for Florida is simply the season between sweaty hot and long-sleeve shirts. I had just received an invitation to be a speaker at a local church in the area. The woman who called was named Daisy. She was sweet, middle-aged, soft-spoken. Whenever Daisy called our office it provided comic-relief to an often stressful day for us. Daisy was a dedicated, caring, hard-working and motivated woman – also known as a southern church-attending catholic woman. Daisy first had called our office after seeing an article in our local paper about a recent trip my company did to Ecuador. We were in the business of sending college students overseas and although most of our time was spent dealing with drunken students abroad and their phoning parents, who still thought their children didn’t drink, quite often we had the chance to go abroad for the greater good. When Daisy first called we were very touched. She had a calling to help us and lord only knows God didn’t have my number. A few months later Daisy came to our office and dropped off enough supplies for the entire country of Ecuador. Unfortunately, encyclopedias in English, American flags and coloring books that had in fact already been colored weren’t exactly what we needed to rebuild an orphanage.

One summer day Daisy’s number came across our caller ID and it was I that was honored with taking the call. She informed me that she was having a little get together for her ladies club at her church and wanted me to come tell her group what she had been doing at this orphanage in which she had never been to, and discuss how many lives have been changed by her cares and givings of english encyclopedias and American flags. The evening came and as I looked across the room I could see my colleague who came to support glaring up at me and practically sending up flares to get my attention. She was motioning for me to look at the schedule for the evening all while laughing hysterically and cheers-ing me with her wine glass. I really had not prepared anything for what I assumed was a little get together and usually don’t get nervous but as I looked at the schedule the words “Keynote Speaker” next to my name made me wet myself a little. “We’ve been so looking forward to this night”, the Priest whispered to me. So have I, I thought. So have I, as I looked out on the few hundred people who had come for the event.

As I was being introduced something powerful came over me. At that moment I realized that as I was sitting there, thousands of miles away there were a group of girls who had been abandoned by their families, abused by those they loved and whose voices may never be heard. This could be their opportunity to tell their own story and I was more than proud to be able to do that for them. Over the course of the next 45 minutes I gave my version of “I have a Dream”. I described my first interactions with the girls. From the moment we arrived all we could focus on was their surroundings, all they could focus on was living life with a positive outlook, seeing past their heartache and differences and providing us with the warmth and love that had so easily been stripped away from them. These girls had been completely tossed aside, left to die, but by the time we left they had changed us in all the ways we had come to change them. And well of course I threw in a few stories about my mom and what she taught me growing up. It was a crowd full of middle-aged woman, talking about my mom was like talking about Bette Midler or Cher to a group of gays. It reeled them in and hooked ‘em immediately.

As the night ended the Priest came up to the podium and told his congregation how powerful the night had been for him. All I could think was that for years I had been turned away by organized religion, always feeling like I was not welcome in their walls. But for one night we all came together to understand that through positive attitudes and seeing past any differences, we can have an incredible impact on those around us. I also was so proud that we were able to spread awareness for a group of girls from so far away and be their voice that so many never hear. As the Priest ended his prayer he said that he wanted to thank us for coming and sharing our story and encouraged his congregation to go out and do what was right. They could all start by going to the poles on Tuesday and voting against gay marriage. Holding back my tears, we couldn’t have gotten out of there faster.

To this day I don’t know what the connection was between these incredibly courageous girls in Ecuador have to do with same-sex couples showcasing their love in America, but I know it opened my eyes. It was a moment I recognized my local community didn’t support me and my husband and that was unfortunately a community we couldn’t raise our children in.

This summer while living in Pasadena, California with our adopted son Hayden a group of older, conservative men at our local Starbucks stopped my husband and I and handed us a card. We often saw them during their morning group coffee outings. For the first few months we lived there they just stared at us, then those stares turned to smiles. Finally one day one of them stopped us and asked, “I hope this isn’t rude but did you adopt that little boy?” At first I wanted to say, well yes it is very rude and yes we did, but there was something about his tone that I felt was simply curiosity. We struck up a conversation about our adoption journey, the birth mom and our thrust into parent-hood when we got the call. Over the course of the next year they always went out of their way to speak to us, give Hayden fist-bumps and cheers’d him with their coffee cups. But it was this one day in June that changed our lives once again. One of the men was a Priest and it was him that handed us a card. We opened it and it was a Wedding Card. All of the guys had seen the Supreme Court announcement and had bought a card and signed it, congratulating Josh and I on our official “marriage.” This time, I couldn’t hold back my tears.

Four years ago, we left our home to start our family. We ran off, scared and sad but excited at the future adventures of parent-hood. Now we board a plane back to that original scene that changed it all for us. Who knows what the future is going to bring, but it’s time we have the same courage those Ecuadorian girls in that orphanage always had shown me. Life must go on and as my favorite quote says, “We must be the change we wish to see in the world.”

Will we have more of these encounters? How will we choose a pediatrician, a school or a new home? Instead of running like last time, this time we want to share it all. LAX to JAX, now boarding. This is our family, our blog….this is Growing Up Hayden. Tune in and join us on the ride. 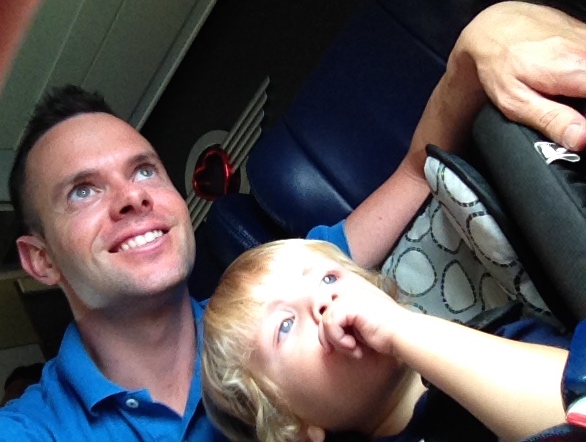