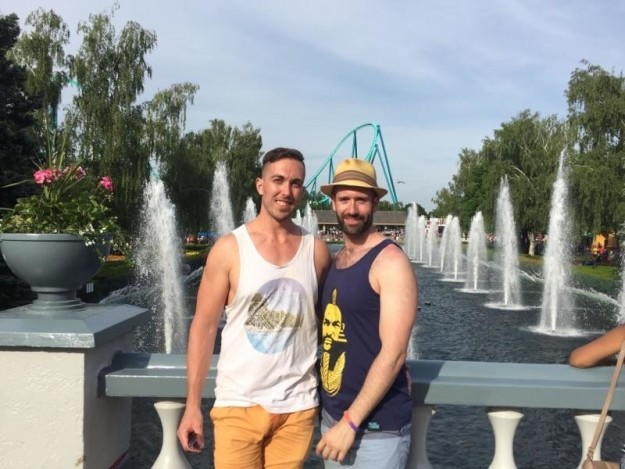 Last week Brandon Hamilton and Barrett Morrison headed out on a casual summer day trip. They visited Wonderland, an amusement park in Canada on the park’s annual Gay Day, an event organized by PFLAG Canada (Parents Families and Friends of Lesbians and Gays) to highlight LGBT issues.

Since it was Gay Day, Brandon and Barrett felt they were in a welcoming environment at Wonderland.  While waiting in line for the lazy river, they expressed a typical and commonplace display of affection for a couple by hugging.  That’s when an employee of Wonderland instructed the couple to stop hugging because they were at a “family” establishment.

Wonderland responded by stating that their employees receive “extensive” training on how to handle discrimination cases.  However, the amusement park also said they had no plans to make Gay Day a park-wide event. “We partner with more than 5,000 groups, communities and companies each season and therefore don’t designate a day to any given group,” Soulla Lindo of Wonderland told BuzzFeed Canada. “But we’ve enjoyed our partnership with PFLAG in hosting this annual event and we hope they will return again in 2017.”

PFLAG Canada, however, accused Wonderland of not being “interested in mending this relationship, and ensuring a safe environment” for LGBTQ visitors. President Bev Belanger told BuzzFeed Canada that her organization’s board “has decided to cancel future Gay Days at Canada’s Wonderland.”