Actress Sara Ramirez identifies as bisexual as did her character on Grey’s Anatomy. Therefore it was no surprise that Ramirez found a bisexual joke offensive on the ABC sitcom The Real O’Neals.

So what was this offensive comment? On the January 17, 2017 episode of The Real O’Neals, Noah Galvin’s openly gay character, Kenny, compared being bisexual to having “webbed toes” or “money problems.”

Ramirez tweeted a link to a Change.org petition imploring ABC to “end biphobia and bi-erasure” on the sitcom. Ramirez also retweeted a January 18th statement from the LGBTQ advocacy group PFLAG, which partnered on the episode in question. “We were so focused on the family acceptance portion of the episode that we completely missed the joke,” the statement said. “In hindsight, we should have caught it and we blew it. We should have done better and we will definitely do better next time. As allies we have a responsibility to own it when we mess up.”

Galvin also addressed the joke last month on Twitter, writing that the show “respects and loves the bi community,” and that the joke represented “a panicky teen expressing his ‘deepest fear’ which was his boyfriend leaving him for a girl.” He added, “I am sorry if we offended anyone. I hope you know our show fights for visibility and inclusivity and we will do better in the future. BUT, we also have to remember, it’s a comedy.”

Do you watch The Real O’Neals? Did you find the joke offensive? Comment here with your thoughts. 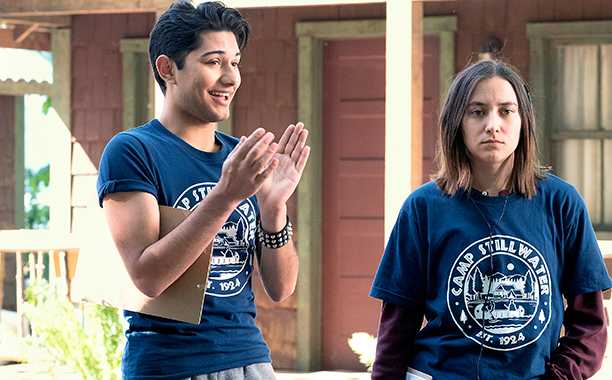 Summer camp frequently promises outdoor adventures, new friends and possible summer romance.  But in the new TV show, Dead of Summer, which premiered on the Freeform network in June, a summer of fun turns into a summer of horror.

Dead of Summer joins shows like Orange is the New Black, Transparent and I Am Cait, in featuring a transgender character. The big difference is that Dead of Summer is set in 1989.

Zelda Williams, Robin Williams daughter, plays Drew, a quiet but cool guy counselor who also happens to be a transgender man. It is very important to Zelda to accurately portray a transgender man, because as Zelda points out, transgender men are not reflected as frequently in Hollywood as transgender women. “The thing I’m most terrified about is the transgender community being insulted by him,” Zelda told Entertainment Weekly. “It’s great that [the public] will get to learn about a male-identifying transgender character as a lead in an ensemble show, but really, more than anything, he is for the transgender community, because they don’t ever get to see him.… I hope that they’re happy with him, because I’m proud of him…. I’m really excited for people to see who he is.”

Zelda did research for her role with transgender men in order to get an accurate portrayal. She told Entertainment Weekly that “The transgender community deserves an honest portrayal, I can’t choose if they like his plot because I didn’t write it, but I can choose if they think that he’s not a stereotype, at least in how I hold myself, and that’s all I can do.”