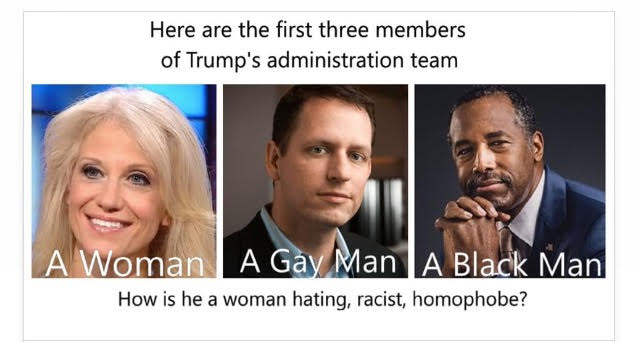 Time Will Tell…And It Has

This picture has been making its way around social media since the presidential election. While we love seeing diversity on Trump’s team, our question is this:

Will President Trump’s policies reveal him to be a woman hating racist homophobe?

Time will tell…And it has.

I originally wrote this the week of the election. Since then Trump has nominated Jeff Sessions for Attorney General, Mike Pompeo for CIA director, and Reince Priebus for Chief of Staff, all older white men. Today Trump finally added some diversity to his team. He announced the nominations of Betsy DeVos as Education Secretary, Nikki Haley as the U.S. ambassador to the United Nations and is looking at Ben Carson to head the Department of Housing and Urban Development.