Hayden's List > Growing Up Hayden > Uncategorized > The Story of Our Lives

The Story of Our Lives

We’ve come across this story a few times today. It just touches all our hearts. It’s a story all too common in the LGBTQ community. We all have to raise our voices, no matter how distant we may feel.

A father received a bittersweet message written 26 years ago from the son he had shunned away because he was gay, but sadly, his son has since passed away.

Duane Schrock Jr. sent his estranged father a touching Father’s Day letter in 1989 in hopes of reconnecting with him, but sadly, the card never arrived, until now.

The father and son had a sometimes strained relationship because Duane Schrock Sr. did not approve of his son’s homosexuality, the father told ABC affiliate WSET in Lynchburg, Virginia.

The note was an effort to repair their relationship, but it never made it to his father before Duane Jr. died of AIDS in 1995.

“Dear Dad,We haven’t been in touch for quite a while, I’m doing fine and am very happy in Richmond, I’d like to hear from you.

Have a Happy Father’s Day,

Now, 20 years after Duane’s death and 26 years after it was originally postmarked, the letter finally made it to the intended recipient.

“Somebody picked up the ball and carried it and after all these years they must still have forwarded it,” Schrock, who is now 87, said. 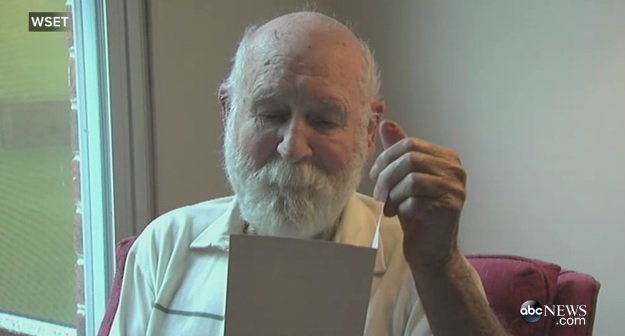 “I still kind of tear up when I think about it,” Schrock said.

Schrock said that before his son died, he had asked him “if he made peace with God because I want to see him in heaven.”

The letter was a happy surprise.

“It was sure welcome and it restored faith in the mail service,” Schrock said.