You know, it’s the little things you do for people to really show them you care.  It’s what this time of year is all about.  Well, that and countless bits of junk mail that seem to come from nowhere.  Except for the Crate&Barrel catalog I signed up for.

Confession: Hayden and I use to walk through the store almost everyday on our walks to the park.  So today, as Hayden napped I figured I would take a break and enjoy one of my favorite pastimes: a leisurely flip through this dreamy catalog.

Only a few pages in I noticed a cute little wine bag, you know the kind.  The one you slip a nice bottle of wine into for your next holiday party.  When I realized it said “Mr. & Mr.” – BOOM! – a total smile crept across my face.  And it only got better.  Next to the “Mr. & Mr.”, the forefront image for this item is a “Mrs. & Mrs.”  For the record, they also have a “Mr. & Mrs.” option but it’s the third option listed.

It’s a little act of acknowledgment from a big company that brought a lot of joy to my heart.  They obviously know who they’re selling to (wine and gay dads go hand in hand!).  I’m excited that they value some of their best customers enough to cater to us!  Thanks Crate&Barrel.  As always, you’re on my holiday shopping list. 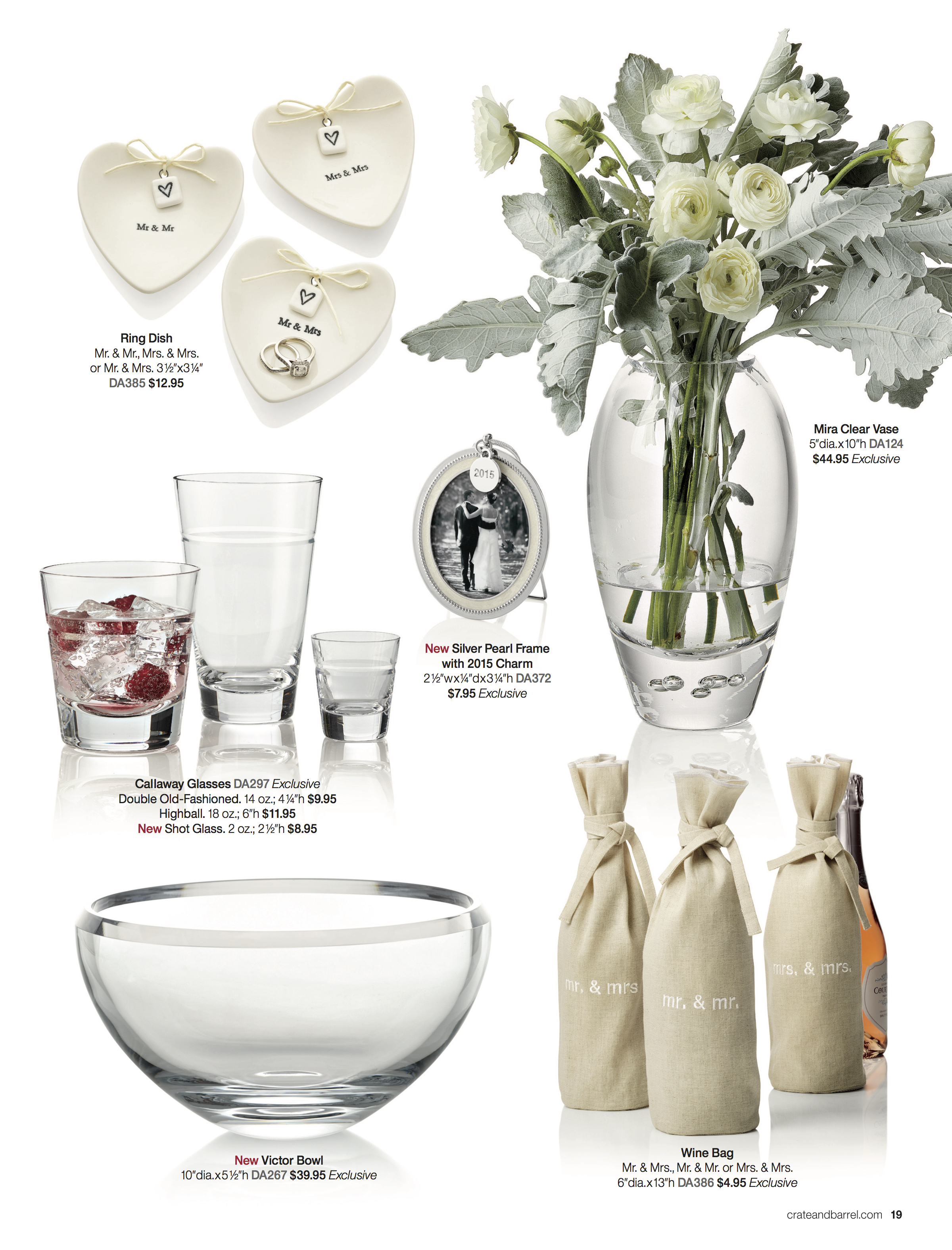 Being an LGBT parent is like being in a sub class of a sub class. We might be making great strides for equality, but it’s still slow going for LGBT parents. When Hayden says “Mommy,” I’m wondering how I might explain to him that his daddies are passively discriminated against?

I knew early on that there would be so many things I’d have to explain to Hayden as he grew up. I just didn’t expect our light-hearted, happy two year old to start asking about mommy so soon. We always knew the mommy question would come.

A small child can’t figure out that two guys can’t make a baby, and our adoption agency (Adoptions With Love) did a really good job at preparing us for long term questions like that. We have support groups and had to go through weekend classes on it. (If only straight couples had to go through what we went through to have a child!) We laid the groundwork for him to have a relationship with his birthmother if he chooses to so so later down the road. For now I know he isn’t really asking where is HIS mommy as much as he’s still in the I-learned-a-new-word-on-TV phase. We watch Sprout TV basically an off shoot of PBS. So we are talking we watch The Wiggles, Caillou, and Sesame Street. In a world that says it’s striving for equality, the media outlets still focus on a mom-dad based family.

Sure there a fair share of “Will & Grace” shows introducing gay characters to society as if we’re “new.” But in the world of children’s TV we are still stuck on Mom+Dad=Family. Occasionally they skirt by with a single mom or single dad to represent different types of families. But all in all not too much has changed since Mr. Rogers. Hence Hayden’s new word.

Awhile back I watched the movie “The Giver” while Scott was out of town. I remember reading this in sixth grade. It was a part of a school program where everyday the teacher read a book to the class for thirty minutes. The story is about a twelve year old boy who lives in a seemingly utopian community. He is selected by the community elders to become the receiver of memory. I mean, how grande does that sound? It’s like this that he meets the Giver: the elder in the community who is entrusted with all the previous knowledge from people before their time. The Giver teaches the boy about everything: color, beauty, love, and hunger, pain, suffering.

Watching this movie all alone, I admit: I teared up. It moved me to know that part of my job as a parent is to show Hayden the amazing world we live in. To show him all the beautiful places and people in the world. To watch him in a school play, witness his discovery of how things work and see him falling in love. The realization quickly set in that I would also have to hold him when he has his first heart break, be there when he falls off his bike, to do my best and explain to him about death when he realizes our dog Louie is no longer around.

The question of mommy is just another one of the lessons daddy is going to have to teach.
Both of us, that is.

Like the other day when I went to breakfast with one of my best friends and her four year old son.  We’re waiting for a table and her son walks over to the hostess and says, “I’m taller than you.”  Everyone smiled and the hostess, blushing a little, graciously replied, “Yes you are.”

My friend retrieved her son and walked him back towards where we were standing, “What do you say to that?” she whispered to me.  The hostess was, in fact, a “little person.”

They say there are two honest people in the world:  drunks and kids.  And it’s true, things kids say provides comic relief. It helps us as adults see the world through more innocent, honest eyes.

I remember a rare trip I took with Scott to the Philippines.  Rare because I hardly ever travel with him because he’s working.  But this time we were there to volunteer at an orphanage. We taught the kids dance classes, fixed up buildings, and did neighborhood cleanups.  Scott and I were sponsoring a child there at the time and it was amazing to actually be able to meet him.

One afternoon while at the family’s hut some of the kids surprised me by asking, “Are you a gay?”

I don’t speak Tagalog but I sensed the parents politely telling the kids that wasn’t polite to blurt out these questions.  In the States I might have felt more embarrassed.  But because I was far away from home, I just laughed and replied with a smile, “Yes, I am.”

It was a milestone for me but I also feel it was a milestone for a country deeply rooted in Catholicism.  Especially seeing as how we were on a very rural island in the middle of nowhere.  Just the fact that these kids would even ask me such a question is proof of some kind of worldly progress.  When a child learns something, a barrier is broken.  We can all learn a little something when a child breaks the social barriers we put up. There is always the hope of change in the eyes of a child. And they really do say the darnedest things.

Sitting out on the deck with my mom for morning coffee makes me remember why we’ve come back here. It’s like being on a family vacation, but this is real life.

In all our plans and dreaming of the future, we shared a similar vision.  We both wanted the house, the family, the extended family nearby, the summers in Europe, we wanted the dream. Originally we left Florida to start our family. We moved to California to pursue that dream. And ultimately and maybe ironically the reason we moved back to Florida was to fulfill that dream.

My mom is so happy to have her son and grandson here. She proudly takes Hayden out to the country club and Hayden loves playing with his cousins. We are looking for the neighborhood to build our dream home, planning the family summers in Europe. We are also planning for our next child. We are in a place where we can affect change in the LGBT community. We are home.

Publix: Where Shopping Really Is A Pleasure 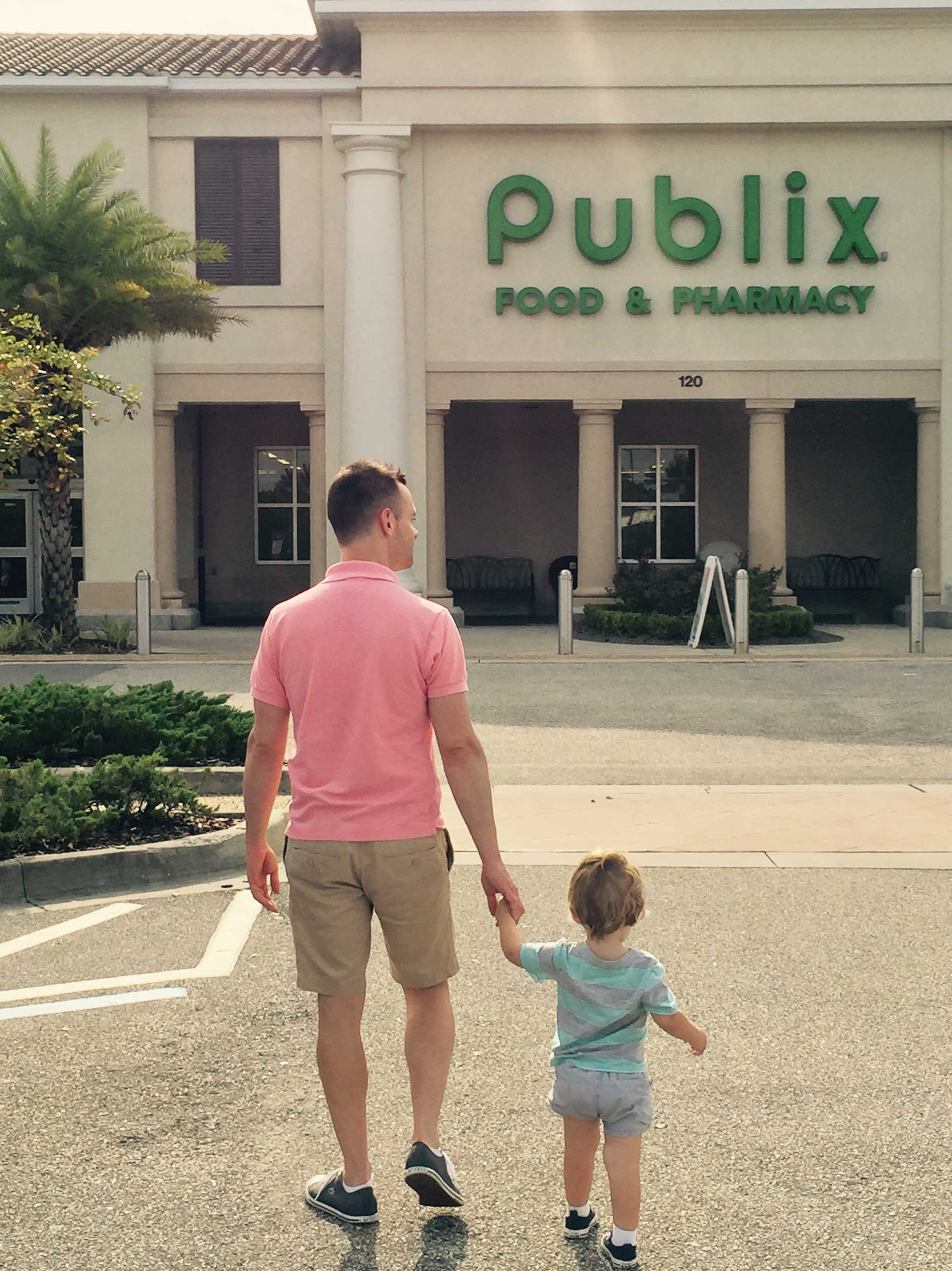 I keep Hayden on a pretty regular schedule. We always go to the park and grocery store every day. It’s that little piece of Paris life that I can’t let go of. I just enjoy going to the “market,” ok it’s only a grocery store I know. But it is my happy place. Aside from the Paris markets and street vendors, and I’ve said this everywhere, Publix is the greatest grocery store EVER.

Publix will always have a special place in my heart. It was my first job. Yep I was a bag boy, then cashier. I was a member of their credit union, where I financed my very first car at the age of 18. It was the place where I felt very comfortable being a gay teen in the south. I dated a guy that worked for Publix, and we moved in together. That was my very first apartment at the age of 17, yes the apartment came before the car. But I digress…

Publix is a great company. It has clean stores, great products, super friendly employees, and a sense of welcoming. Moving back to Florida meant I could share that with Hayden. We go to the grocery store every day, sometimes three times a day. Going to Publix is like going to Disney World for me. And now it is for Hayden too. 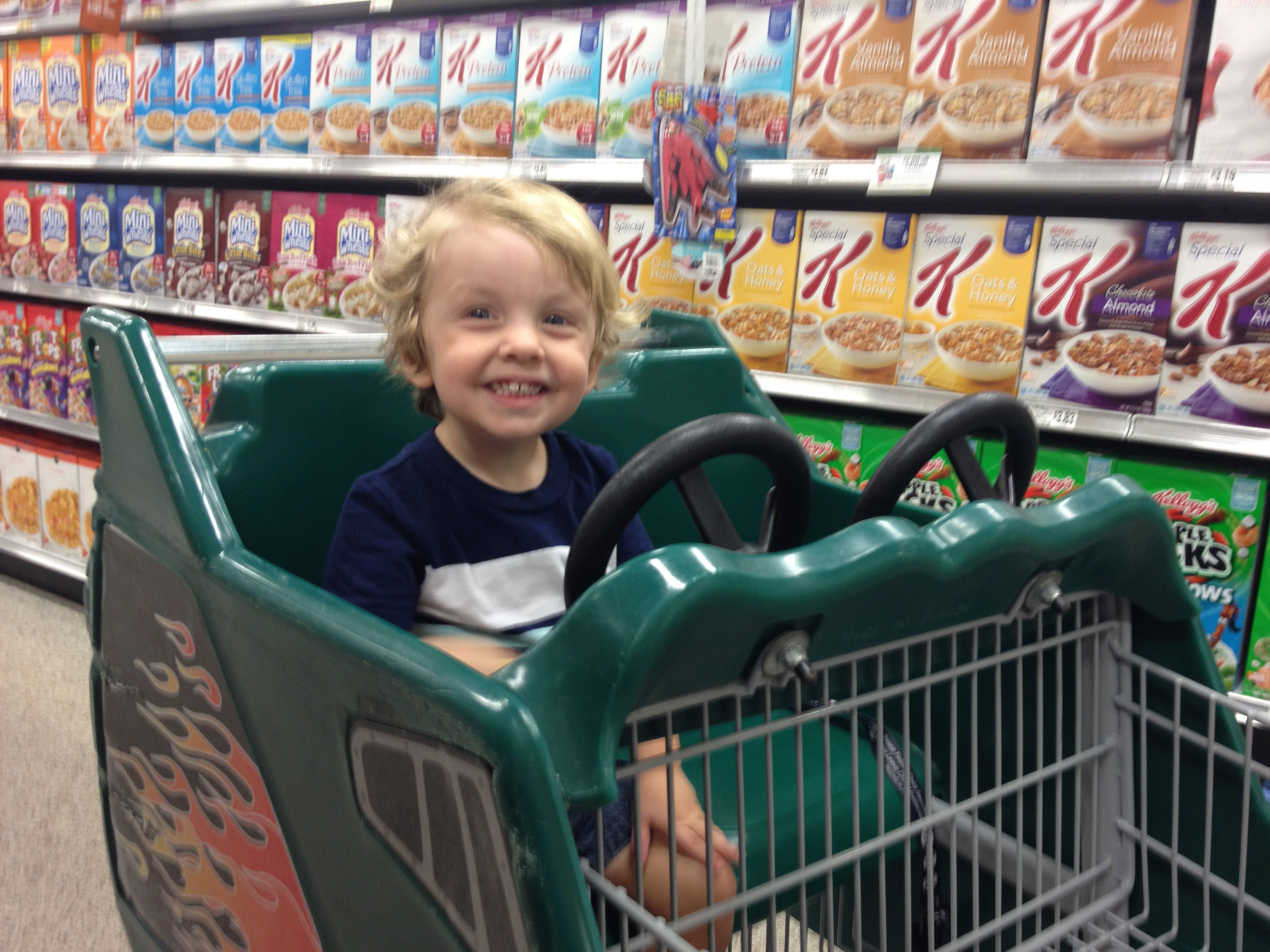 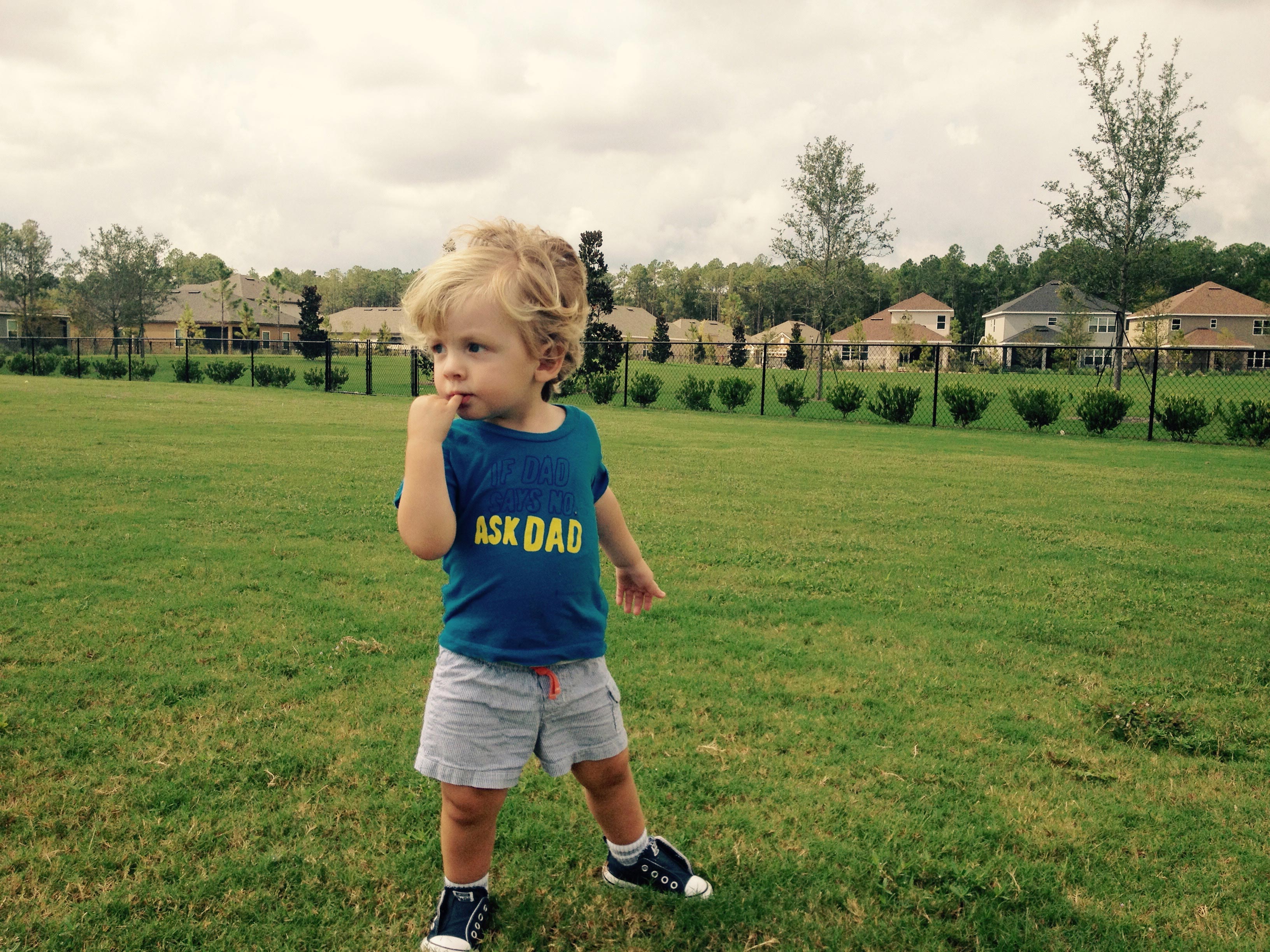 Hayden strikes a stoic pose at the playground.

Remember way back in grade school when we would all go outside for recess?  Sure the playground was fun, but it was also the cut-your-teeth ground; kids calling each other names, pushing each other down, trying to figure out who they are and aren’t.  As adults and parents, we take our kids to the play ground and, well, nothing much has changed. Parents pair off into groups and talk about all the things going on, who’s a bad parent and did you hear what so and so did?  Nothing much has changed since second grade.

I’ll admit I have a little adult playground anxiety: I’m the “new parent” in town.  As we reestablish ourselves here in Florida, I want to keep Hayden on his regular routine, which involves a daily trip to the playground.  It’s the perfect way for him to play with other kids his age, try new things, climb, run, slide and occasionally fall.  Finding a new playground might sound simple enough but for me it presents a few difficulties.  For one, I hate being outside.  And two, I suffer socially.  Most of the time I push through it and do the best I can simply because I don’t want my own anxieties to trickle down and affect our son.

Needless to say, I was so scared to go to a new playground in the town where we’re currently living while we stay with my parents.  Here in Florida, it seems like not much has changed since the 50s.  Moms tend to go in the morning and dads tend to go in the afternoon while the moms are at home fixin’ dinner.  So sexist.

It’s no secret that my biggest concern with the move has been people’s attitudes toward our family.  How will people react to the gay dad on the play ground?  Will they still be ok with Hayden playing with their kids?  My defenses are up: I keep thinking there’s a big group of narrow-minded republicans who will at any minute start talking trash, attacking our family.

But as it turns out, no one seems to care.  Which leads me to believe that actually, I’m the one with the problem.  My problem isn’t just being outdoors.  It’s also the fact that maybe I need to revisit my own stereotypes and prejudices.  But for now I’ll celebrate the day as I conquered my playground fears!

Hayden may have left Los Angeles for Jacksonville, but he still likes to travel incognito 😎😎😎
#can’t take the cali out of the baby