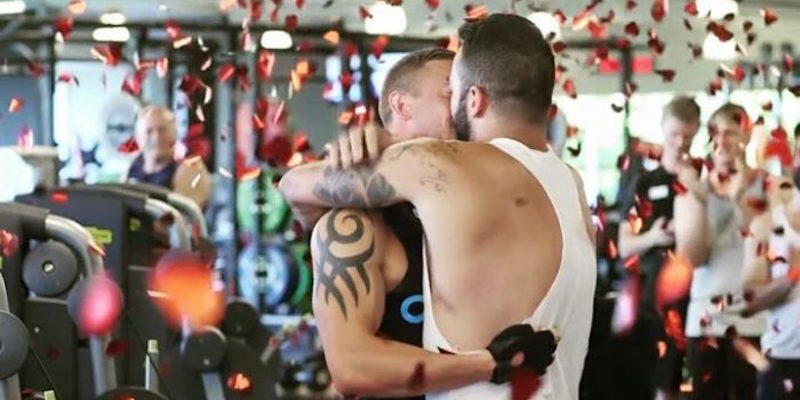 A Reason to Keep Your New Year’s Resolution

If you need another reason to keep your New Year’s resolution of going back to the gym, Nico Martina and Mikey Sinclair just gave it to you.

Martina and Sinclair met at Fitness First in Sydney, Australia and also just got engaged there. Martina used the help of Kate Elizabeth Proposal Planning. The proposal is documented in a four minute video which stars out with pair just casually working out. Hired dancers dressed as fellow gym rats start the flash mob. Martina joins and then gets down on one knee and pops the question to Sinclair. Spoiler alert: He says yes!

Martina told How He Asked that the proposal was also a way to send a message that “love is love” no matter what your sexuality is.

Michael Richman and John Rabbia met three years ago at NYC Pride when they joined a group of flag dancers named, “The Flaggots.”  After dating long-distance, finally they found themselves in the same city so John decided to propose. For the perfect proposal he received help from the whole Flaggots team. During their routine at NYC Pride in June, John emerged out of an abundance of LGBT flags, got down on one knee and proposed to Michael.

The video has gone viral so quickly that some relatives are finding out about the engagement via social media. John explained to BuzzFeed that the video is very uplifting especially after the recent tragedy in Orlando. “The Orlando tragedy was so heartbreaking and everyone in the community was so upset and devastated,” he said. “It’s nice there’s a ray of sunshine at the end. There are new beginnings and our community is resilient. Maybe it gives people something to latch onto.”
“There is hope,” he said.