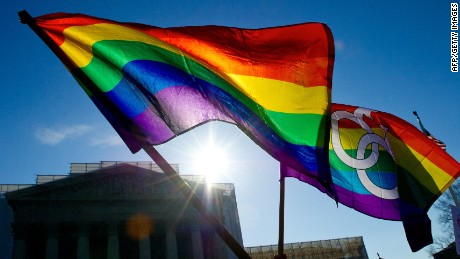 In a landmark opinion, the Supreme Court ruled Friday that states cannot ban same-sex marriage, establishing a new civil right and handing gay rights advocates a victory that until very recently would have seemed unthinkable.The 5-4 ruling had Justice Anthony Kennedy writing for the majority with the four liberal justices. Each of the four conservative justices wrote their own dissent.The far-reaching decision settles one of the major civil rights fights of this era — one that has rapidly evolved in the minds of the American pubic and its leaders, including President Barack Obama. He struggled publicly with the issue and ultimately embraced same-sex marriage in the months before his 2012 re-election.”No union is more profound than marriage, for it embodies the highest ideals of love, fidelity, devotion, sacrifice and family,” Kennedy wrote. “In forming a marital union, two people become something greater than they once were.”In a dissent, Justice Antonin Scalia blasted the Court’s “threat to American democracy.””The substance of today’s decree is not of immense personal importance to me,” he wrote. “But what really astounds is the hubris reflected in today’s judicial Putsch.”Chief Justice John Roberts wrote that the decision had “nothing to do with the Constitution.”If you are among the many Americans—of whatever sexual orientation—who favor expanding same-sex marriage, by all means celebrate today’s decision. Celebrate the achievement of a desired goal,” he wrote. “Celebrate the opportunity for a new expression of commitment to a partner. Celebrate the availability of new benefits. But do not celebrate the Constitution. It had nothing to do with it.”The U.S. is now the 21st country to legalize same-sex marriage nationwide. Married same-sex couples will now enjoy the same legal rights and benefits as married heterosexual couples nationwide and will be recognized on official documents such as birth and death certificates.By the numbers: Same-sex marriageThe decision affirmed growing public support in the U.S. for gay marriage, with about two-thirds of Americans now in favor. And it comes as gay rights groups have seen gay marriage bans fall rapidly in recent years, with the number of states allowing gay marriage swelling most recently to 37 — that is, until this ruling.There were two questions before the Court, the first asked whether states could ban same sex marriage, the second asked whether states had to recognize lawful marriages performed out of state.The relevant cases were argued earlier this year. Attorney John Bursch, serving as Michigan’s Special Assistant Attorney General, defended four states’ bans on gay marriage before the Court, arguing that the case was not about how to define marriage, but rather about who gets to decide the question.The case came before the Supreme Court after several lower courts overturned state bans on gay marriage. A federal appeals court had previously ruled in favor of the state bans, with Judge Jeffrey Sutton of the Sixth Circuit U.S. Court of Appeals writing a majority opinion in line with the rationale that the issue should be decided through the political process, not the courts.Fourteen couples and two widowers challenged the bans. Attorneys Mary Bonauto and Doug Hallward-Driemeier presented their case before the Court, arguing that the freedom to marry is a fundamental right for all people and should not be left to popular vote.

Three years after Obama first voiced his support for gay couples’ right to marry, his administration supported the same sex couples at the Supreme Court.”Gay and lesbian people are equal,” Solicitor General Donald B. Verrilli Jr. told the justices at the oral arguments earlier this year. “It is simply untenable — untenable — to suggest that they can be denied the right of equal participation in an institution of marriage, or that they can be required to wait until the majority decides that it is ready to treat gay and lesbian people as equals.Map: Where same-sex marriage is recognized in the U.S.The same-sex couples who challenged gay marriage bans in Michigan, Tennessee, Kentucky and Ohio were just a few of the estimated 650,000 same-sex couples in the United States, 125,000 of whom are raising children.The challenges included same-sex couples who wanted to marry, those who sought to have their lawful out-of-state marriage recognized, as well as those who wanted to amend a birth or death certificate with their marriage status.The lead plaintiff in the case is Jim Obergefell who married his spouse John Arthur in 2013 months before Arthur died.The couple, who lived in Ohio, had to travel to Maryland aboard a medical jet to get married when Arthur became gravely ill. And when Arthur died, Obergefell began to fight to be recognized as Arthur’s spouse on his death certificate.The plaintiffs from Michigan are April DeBoer and Jayne Rowse, two Detroit-area nurses who are